How does the indoor climate impact our health and well-being?

As we spend so much time indoors, the indoor environment can make a dramatic impact, both positively or negatively, on our health and well-being.

With people spending about 90% of their lives indoors, buildings have a substantial impact on the health and well-being of their occupants.

What do we mean by health and well-being?

Health is the status of a persons physical and mental condition. Good health is about the mind as well as the body, i.e. feeling physically fit and feeling good within our self.

Peoples health and well-being are determined by a complex combination of many human and environmental factors, including those related to the built environments.

We spend 90% of our time indoors

Where does this very much-quoted statistic come from?

Surprisingly there were many studies performed at the 20th-century gathering human activity patterns and human exposure data. A marginal study conducted in America and published in 2001 was based on the idea of time-budget and money. In other words, a time-budget for a person which has 24-hours of different activities and one wants to quantify or “money-fy” it.

The actual figure is 87% indoors

Here is the breakdown of where we spend our time:

Are we indoor people?

In the stone age (about 2.6 million years ago until about 3,300 B.C), the results of where we spend our time would have likely been the opposite. The way our morderns lives are structured now means we spend more time indoors than ever before.

Another researcher, W.R. Ott, basically suggested that a large amount of time spent indoors is a fundamental characteristic of the human species. Ott said, “The finding that emerges is that we are basically an indoor species.”

In this statement from the 1980s he says, “In a modern society, total time outdoors is the most insignificant part of the day, often so small that it barely shows up in the total.”

But that may be slowly changing… And perhaps after some more years or decades, maybe even centuries, people will again live differently – perhaps more outdoors or even in outer-space. Hopefully, with good air!

From the indoor environment developments during the past three centuries it can be concluded that health had priority in the beginning. 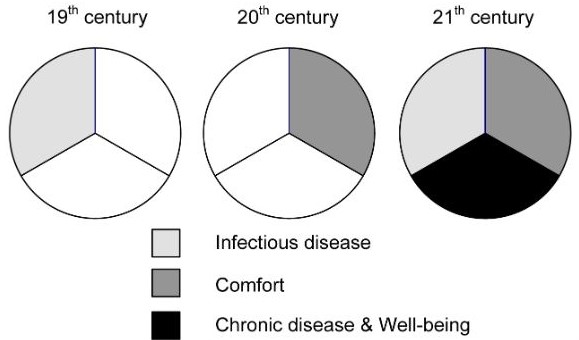 The evolution of human health and the indoor climate

Human beings are not adapted to the conditions or temperatures at polar latitudes, even though parts of these regions have been populated for several thousands of years.

The ideal temperature for a naked person at rest is about 29°C: a stable temperature found in the mountain and savannah landscapes of Africa, the probable origin of our ancient ancestors.

Without clothing and shelter, humans could be regarded as a tropical animal that could only survive in a narrow zone along the equator. When our ancestors migrated north, not only was proper clothing needed but a protective shield from the outdoor climate also had to be developed. From this came housing and building technology that began to evolve and adapt to very challenging winter climates.

The indoor environment is not only vital for our survival, health and well-being but has also helped the human species to thrive and spread geographically.

What does our body need?

To stay productive and healthy, we are also careful about what we consume in the form of fluids and food, but we rarely think about all the air we consume with each breath.

On average, an adult male with a sedentary occupation will breathe about 15 m3, or roughly 15 kg of air, drink 1.5 litres, or 1.5 kg, of water and eat about 0.75 kg of solid food per day. Hence, the weight of breathed air constitutes about 87% of the total biological mass turnover every 24 hours.

Short term impacts on our health

Headaches can be caused by low oxygen levels in the air, high levels of toxins such as volatile organic compounds (VOCs), mold and allergens, ultrafine particulate matter, carbon monoxide and carbon dioxide.

Poor ventilation can lead to respiratory problems such as difficulty breathing, coughing, shortness of breath and infections, If not addressed this can develop into long term health issues such as lung cancer and chronic lung diseases such as asthma.

Poor air quality can cause rhinitis - a reaction that causes nasal congestion, runny nose, sneezing, and itching. Most types of rhinitis are caused by inflammation and are associated with symptoms in the eyes, ears, nose or throat.

Spending prolonged time indoors where the air is not clean or is too dry can lead to an increase in asthma attacks and the medication used to treat asthma symptoms. Higher levels of pollutants or allergens can irritate the respiratory system and may contribute to asthma symptoms.

Poor ventilaition, such as poor airflow, can cause congestion and increase mucosal symptoms which may present in our bodies through a runny nose or a rattling wet cough.

If our indoor environment isn't balanced not only do we have short term side effects, it also can also cause long term implications for us.

With repeated, long-term exposure, the risks may increase significantly. Prolonged exposure can potentially lead to mood changes, respiratory and cardiovascular diseases, neurological disorders, cancer, and other health conditions. Airborne pollution is also a hazard to pregnant women and young children, increasing the risk of birth defects and developmental problems.

Other health effects may show up either years after exposure has occurred or only after long or repeated periods of exposure. These effects, which include some respiratory diseases, heart disease and cancer, can be severely debilitating or fatal.

We are biologically adapted for a continuous supply of fresh air.
Anonymous